The self imposed hobby edict to create a table bursting full of diorama-type terrain is alive and well. In the past month I have been building, spraying, dry brushing and washing in a rattle canning, paint splattered fury!

But I have made significant headway and learnt that cool terrain doesn’t have to cost the world or have to take up a tremendous amount of hobby time.

I assembled and painted this piece of terrain last year.

Ideally, I’d like all of my terrain looking like this. Seriously though, this is not tenable. I probably could have assembled and painted a squadron of tanks or a large squad of miniatures in the time it took to make this. Not ideal.

I love looking at it and I’m proud of the little details; the blood splatters, the oxide, the washed out, griminess of it all. I’m also pleased with the little bits of Blanchian artwork and propaganda images that have been pasted to the walls. Unfortunately though, when put upon the battlefield, it seemed to detract somewhat from the miniatures. Worse still, it make the rest of the terrain (then under various stages of progress) appear somewhat underwhelming and demanded that I paint all of it to that level of detail. 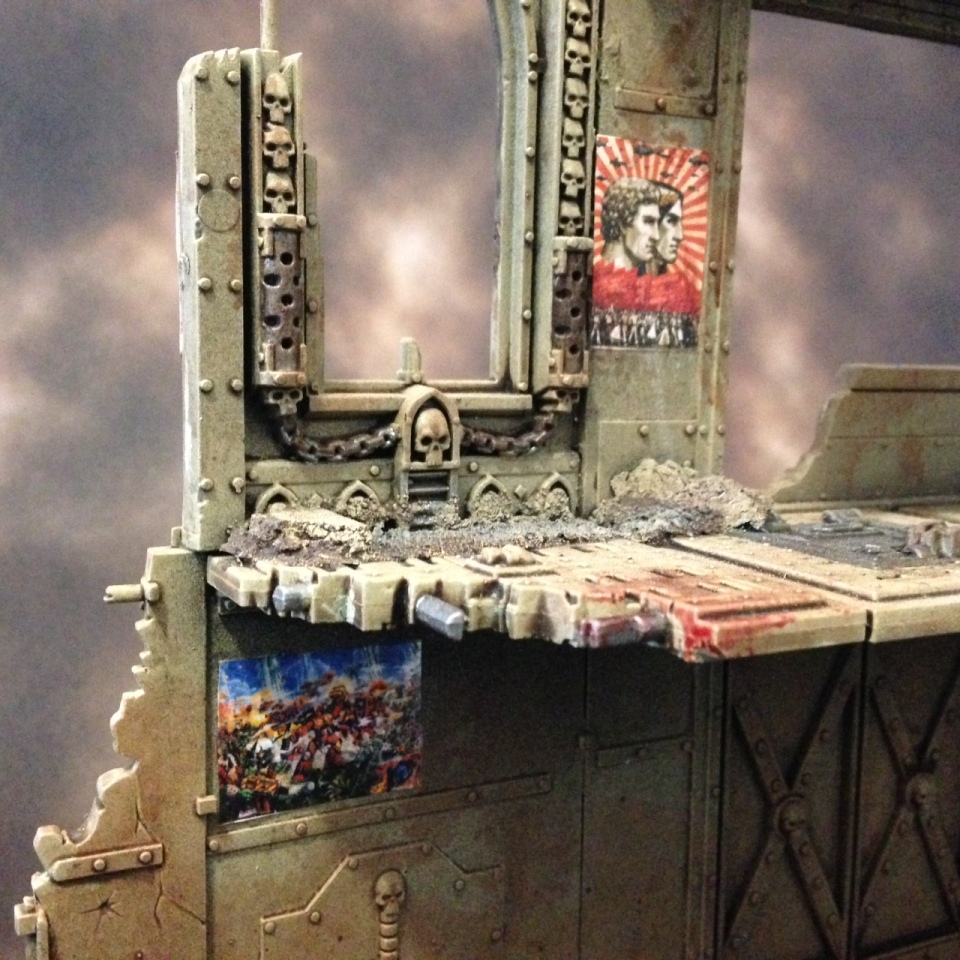 The grimy sandstone effect jarred with my city rubble neoprene mat and rather sealed the deal – I needed a new solution – a new direction entirely. I would keep this piece of terrain, but it would represent a municipal or religious building rather than be A-typical of the structures that were to be found on this city fight table.

During the recent 40kathon with Nick, Alex and James, we discussed terrain at length during and between games. We all fully subscribe (and are subscribed) to Carl Tuttle’s view that terrain is ‘The Third Army.’ [I urge you to check out The Independent Characters Podcast – you won’t regret it.] Whilst the GW terrain is undeniably awesome, the repetition of design choices and aesthetic soon gets old. It also dictates play style a little too much and undermines certain units. How valuable, for example, would jump infantry become on a table full of multiple levels and gantries?

We also wanted to see into civilian life a little more. What about subway entrances, abandoned imperial parks or a mausoleum complex? How about wrecked civilian vehicles or little details that told of frantic evacuation, ration distribution or martial law? The severe STC brutalism of the GW buildings doesn’t tell that kind of story, but could be integrated to add the aesthetic stamp and unify the look.

On my last post I mentioned TTCombat, and showed you a snap of two cargo containers.

Well, I was so impressed with the designs that I bought several sets of their terrain, including gantries, barricades, walls and ruins. They were painted up in short order and I was careful to choose colours that matched the neoprene mat this time:

When painting the gantries, I could not stop imagining jump troops boosting up to secure the high ground or the kind of close action reminiscent of Necromunda. Metallics and rust paint completed the look.

I duplicated this method for some barricades too. 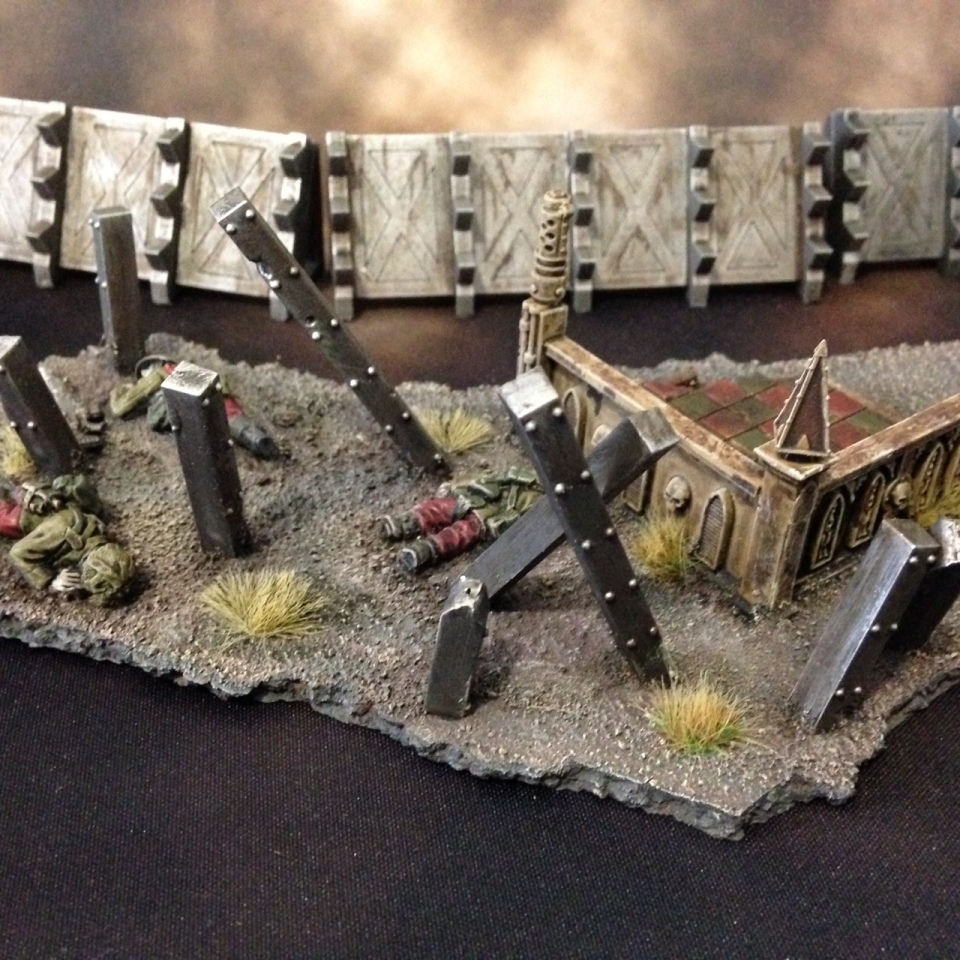 At this point I wanted to get creative and had a look in my bits er…bag. I wanted a few pieces of scatter terrain that told a story. This wrecked rhino has clearly been here for a while, and many battles have been fought over its desiccated remains.

This is rather grisly, but the remains of the PDF or perhaps ‘the first wave’ could be used either as terrain dressing or ad hoc objective markers. 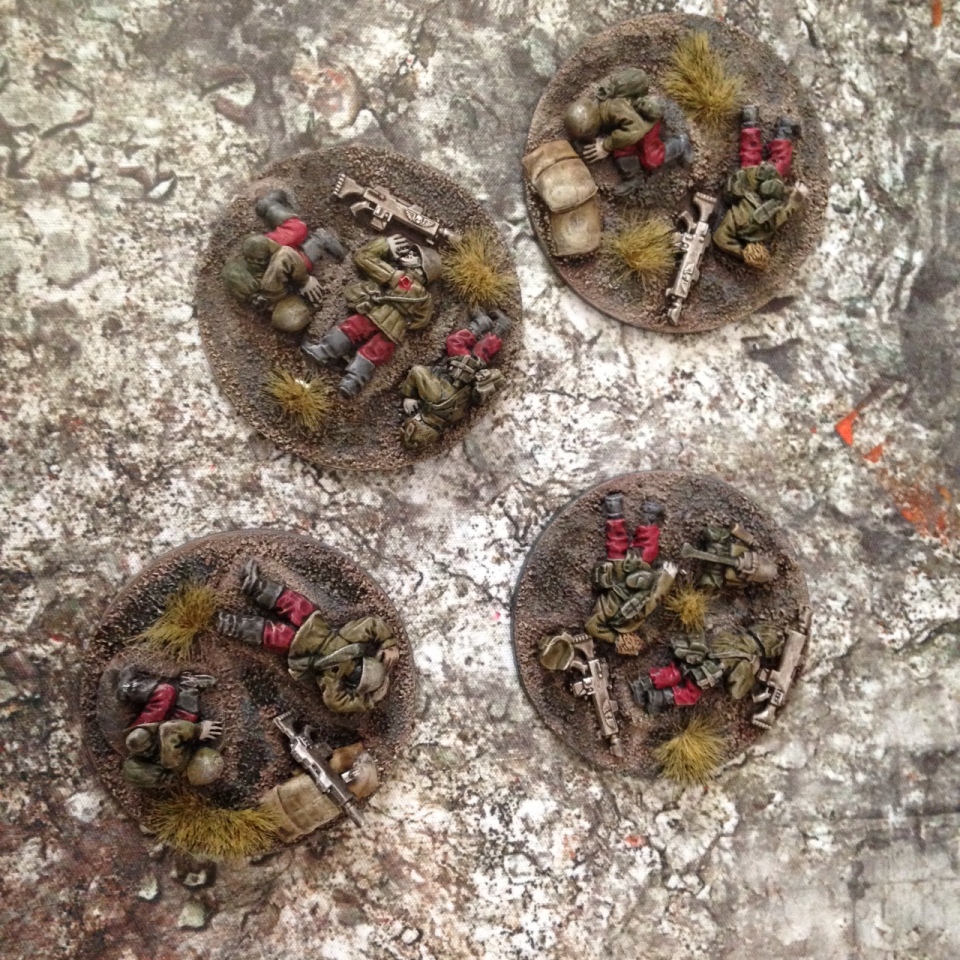 These two statues, dedicated to the space marines who liberated this world, stand tall amongst the rubble.

James very kindly gave me this manufactorum after the geekend. I assembled it to look like one of the more eccentric suggestions on the packaging.

These ruins have only been sprayed and dry brushed so far. I will probably add more details and weathering, but for now they’ll serve. 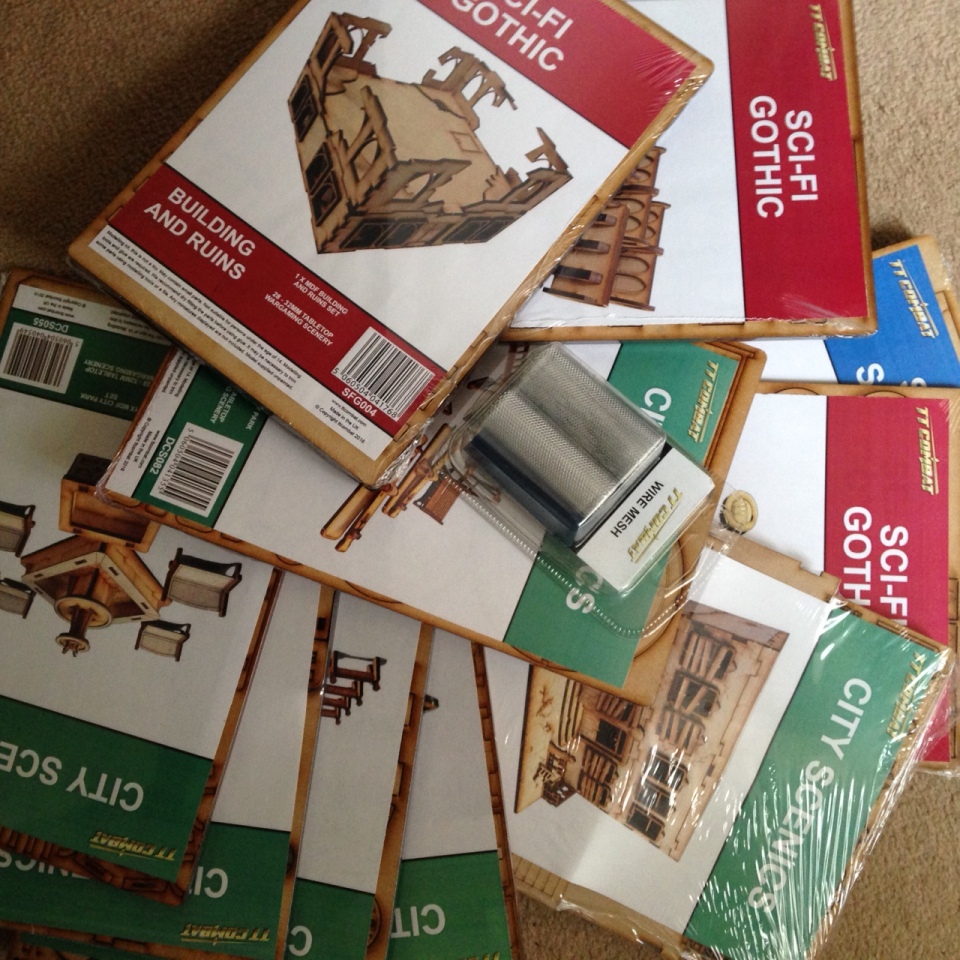 Thank you for reading and I look forward to bringing you more of this project soon.