It’s been a while, but TBT is back. I thought I came up with this myself, but having listened to Ash on The D6 Generation over the weekend, I suddenly remembered that the name ‘Throw Back Thursday’ sits firmly in Ash’s court. Check out his stupendously good channel on youtube: Guerrilla Miniatures Games, not least for his superior iteration of Throwback Thursday. (The original and the best!)

Anyway, this week I’ll be looking at the infamous Catachan Jungle Fighter. 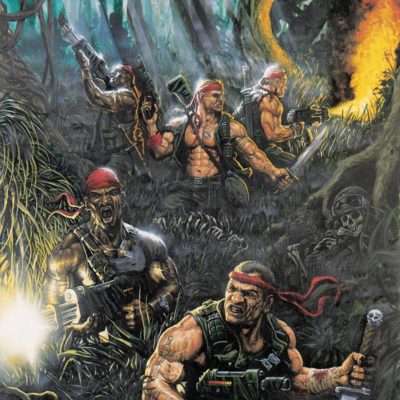 Before going any further I want to go on record as saying that amongst the worst, fugly and downright dated miniatures in the GW catalogue are the Catachan Jungle Fighters. But wait, I’m referring to the plastic models. Strange then, that their original sculpts (released a years before the plastics) should be so vastly superior. 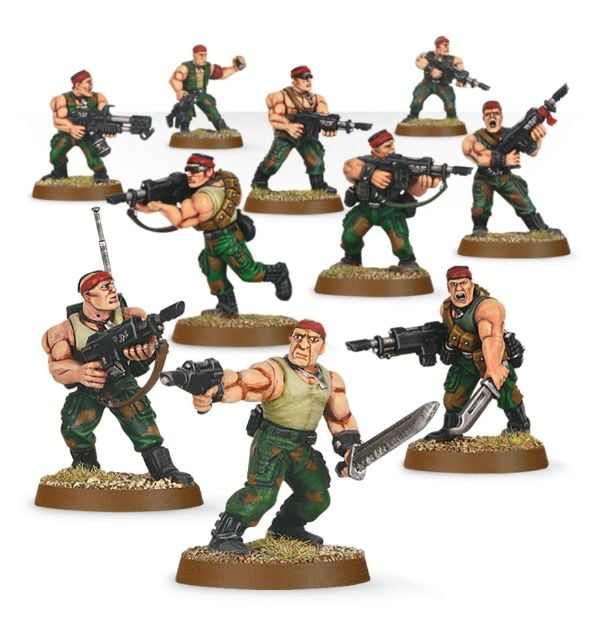 Bursting with character and guile…

Look at this guy! The Catachans are born on a Death World of the same name. This world is the three-way lovechild of Pandora, Predator and Audrey from Little Shop of Horrors. Quite simply, its denizens want nothing more than to poison you, incubate inside you and then explode you everywhere to scatter seeds. Yikes. And they’re the nice ones. So, what kind of humans could survive in a place like this? – Thrive in a place like this? – Make pillow cases out of the most dangerous fauna in the known universe? These men who make up some of the most magnificent soldier stock of the Imperium of Man? Hard ones apparently.

The aesthetic result is heavily, unapologetically drawn from Stallone and Arnie and their adventures in the South American and Vietnamese jungles. These sculpts are pure, unabashed testosterone fuelled visions of soldiery, a vision as out of step with reality as was most of the pop culture of the 80’s and 90’s. Forget the fact that they’re not wearing any body armour, or that they’d have to consume about 10,000 calories a day to stay that size. Even if that mass was some kind of genetic predisposition, it serves little purpose other than to intimidate the overwhelming horde of mankind’s enemies, most of which sadly cannot be intimidated by any means. No, it is the guile, cunning and will to survive that truly makes the Catachans what they are. Or so we’re told.

The appeal of these guys lies purely with the Perrys’ and Matt Holland’s sculpts. There’s so much character in each, like a movie poster for an action movie, each pulling a dynamic pose telling its own story. This guy is leaning forwards, either about to break into a run, or straining to hear, perhaps to smell some nearby threat…

Surely they should be unstoppable on the tabletop?

Wait? What? Yes. Those are the stats. Those are Rambo’s stats. In the 41st Millenium, a one man army of the 80’s is nothing more than a footsoldier, a worthless, forgotten instrument to be spent needlessly and without hesitation.

These sculpts were released when Second Edition was alive and kicking. Though unstoppable looking on the tabletop, they would face up to their foes – the Tyranids.

There they are now, the Guard of Catachan, lined up in a formidable gunline, entrenched in bunkers and trenches with a Leman Russ in support, ready to ‘pour it on’ those foul xenos.

Then the Tyranid player pulls out a strategy card.

A barbed strangler bursts out of one of the hapless guardsmen, killing three of his fellows.

…These guys don’t stand a chance…

Welcome to the suck!